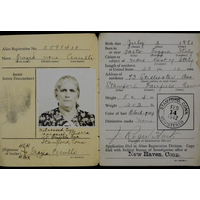 In 1942 Maria Grazia Antonia Cerulli, along with approximately 695,000 other Italians citizens residing in the United States, was designated an “enemy alien”. As all Italians were seen as violent and Mafiosi, now all Muslims are potential jihadists and hence need to be kept out of the USA. Martin Niemöller’s words as a lesson to be heeded

For those of you conversant with Italian journalists and their writings, you will recognize that I have borrowed from the title of Gian Antonio Stella’s 2002 book about the historical victimization of Italians in the United States, L’orda: quando gli albanesi eravamo noi (The Horde: When We Were The Albanians). Stella, for those of you who do not know, recounted the history of the Italian immigrant in the United States with the clear goals of contextualizing it for his contemporary Italian brethren. We might then take a cue from Stella and, as Italian Americans, ponder our president’s most recent executive order that bans more than 134 million people from entering the United States, basically because they are Muslims.

When I first heard about the president’s order to suspend entry of all refugees to the United States, to bar Syrian refugees indefinitely, and to block entry into the U.S. for 90 days of citizens of seven predominantly Muslim countries (Iran, Iraq, Libya, Somalia, Sudan, Syria, Yemen), two historical references came to mind. I first thought of my grandmother from northern Puglia who entered this country in 1906 with four little boys. Then, I realized soon thereafter that this executive order also bans entry to green-card holders from these countries. So, after hearing of this second provision to the executive order— the banning of entry to green-card holders — another historical reference came to mind, Martin Niemöller’s famous quotation, whose opening line is: “First they came for the Socialists, and I did not speak out.”

Now, allow me to explain my grandmother’s existence as an historical reference. As I mentioned, she came to this country in 1906, at the age of 25; she then went on to have, in all, eleven children, nine of whom lived good lives as adults. On February 14, 1942, at 61 years old, she, along with approximately 695,000 other Italians citizens residing in the United States, was designated an “enemy alien,” identity card and all; and, as a consequence, she was restricted from sensitive areas in this country, wherever they might have been classified. The upshot of this all is that Maria Grazia Antonia Cerulli, who was born in Faeto (FG) Italy, in 1881 and died in Stamford, CT in 1973, remained a life-long Italian citizen for two basic reasons: (1) She did not know how to read or write; and she was a monolingual speaker of Faetano, a Franco-Provençal dialect of northern Puglia; (2) Her husband, instead, could read and write; and he was a trilingual speaker of Faetano, Italian, and English. Hence, any benefits from citizenship she might enjoy were readily transferred through his.

The absurdity in all of this was that she, like the preponderance of the other 695,000 enemy aliens from Italy residing in this country, was one of many harmless individuals who had escaped an impoverished and, in some areas, naturally diseased (malaria) land (southern Italy). The main desire of the 5,200,000 Italian immigrants of the turn of the century was to seek out a better life for themselves and their families, whether their stay in this country was to be temporary or permanent. Nothing more. Indeed, many of the progeny of these millions of Italian immigrants have since contributed indelibly to the social, scientific, political, and cultural fabric of the United States. This, in spite of the many decades of demagoguery through a consistent defamation in various media outlets, dating back to the late nineteenth century, as well as being subject to “Title 50 U.S. Code § 21 – Restraint, regulation, and removal.”

Now, we have the echoes of Title 50 US Code in this most recent executive order. As all Italians were seen as swarthy, violent, womanizers, Mafiosi [Some would insist such stereotyping still exists.], now, so it seems, all Muslims are potential jihadists and hence need to be kept out of the United States for at least 120 days, until they can be vigorously vetted. [The four countries from which, for instance, the 9/11 hijackers originated — Egypt, Lebanon, Saudia Arabia, United Arab Emirates — are not included.]

Clearly, we should all be concerned with the threat of violence that might emanate from any sovereign state that supports terrorism, especially the type that we have witnessed in recent times. But we also need to be vigilant as to exactly where this violence originates; for none of the recent terrorist attacks in the United States was perpetrated by people who entered the country recently. And in this regard, I suggest viewing the following videos, which begin with one by CNN journalist Bill Wedeman.

The painting of one brush is simply something we have witnessed too many times in our modern era. And it was, thus, for me, as a long-time scholar of Italian-American studies, that the thought of saying something about this recent ban based on national origin and religious belief brought to mind the second historical reference, Niemöller’s famous, seven-line quotation.

Finally, let us remember that the protests of this ban are coming from different corners of society. Elected officials include Democrats such as Andrew Cuomo and Bill de Blasio, as well as Republican Representatives Charlie Dent (PA; “This is ridiculous”) and Justin Amash (Mich.;  who posted that the ban “overreaches [and] undermines” the Constitution). Their concerns are also in line with leaders of nearly every Christian denomination. Indeed, even then Indiana governor Mike Pence, in his tweet of December 8, 2015, called then candidate Trump’s proposal to ban all Muslims from entering the United States “offensive and unconstitutional.”

Martin Niemöller’s words carry even today their original potency as a lesson to be heeded:

First they came for the Socialists, and I did not speak out—

Because I was not a Socialist.

Then they came for the Trade Unionists, and I did not speak out—

Because I was not a Trade Unionist.